Protect Your Products and Those Handling It with Folded Edge® Technology

Did you know the mos 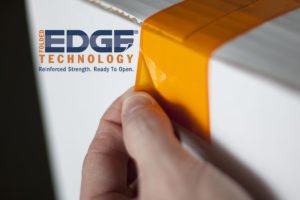 t common way to unpack merchandise might also be the most costly?

That’s right. Using a knife or other sharp object to open cartons can carry serious ramifications if not used carefully.

Knife cuts and nicks cause product damage and may cause items to be deemed unsaleable, resulting in costly returns. The Grocery Manufacturers Association and the Food Marketing Institute estimate that damaged product and other unsalables cost consumer packaged goods manufacturers $15 billion annually – or 1 to 2 percent of a manufacturer’s gross sales.

On the personnel side, worker injury due to cuts and lacerations can also be expensive, not to mention dangerous. In fact, the Occupational Safety and Health Administration (OSHA) estimates that just one cut or laceration can cost upwards of $36,500, including direct costs such as workers’ compensation payouts and healthcare, and indirect costs such as wages paid to an injured worker beyond workers’ compensation payouts, wages paid related to lost time or work stoppage, and time and money spent on worker replacement.

So why not eliminate the knife from the equation?

Folded Edge® Technology addresses the need to open cartons with a knife by creating a ready to open case seal.

How does it work?

A patented attachment on the tape applicator folds the edges of the tape along the length of the carton, creating a secure, easy-to-open carton seal that doesn’t require a knife or other sharp instrument to open. The folded edge essentially creates a dry edge that allows the tape to be grasped and easily removed by hand, reducing the risk of product damage and personal injury.

An additional advantage of Folded Edge Technology is increased strength of the tape edge. This is especially beneficial in keeping the seal intact at its most vulnerable failure point, where the tape folds over the edges of the carton. Folding the edge mitigates the risk of the tape being nicked and broken, providing an added layer of security to keep contents secure from damage, contamination and theft. 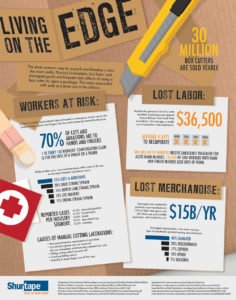 Living on the Edge Infographic